Press Release: Canada’s “battles in the woods” flare up in Prairie headwaters

(Map & contacts at end.)
Canada’s “battles in the woods” flare up in Prairie headwaters
Market action launched against logging in Alberta’s southern Rockies

Calgary: A market action against clear-cut logging in the southern headwaters of the Prairie Provinces has been launched by local and national conservation groups, with international ones adding their names to the grassroots action. It focuses on the Crowsnest Forest, which is located at the head of the water-stressed South Saskatchewan River system, between Kananaskis Country west of Calgary and the Waterton-Glacier International Peace Park. The Crowsnest falls within the international Crown of the Continent geotourism area. It is the southern part of the public Rocky Mountains Forest Reserve, which the governments of Canada and Alberta historically described as important to the nation as a “conservation area dedicated to watershed management.”

Eighty-seven lumber retailers in southwest Alberta received letters asking them to decline selling Spray Lake Sawmills (SLS) wood from the Crowsnest Forest and instead sell Forest Stewardship Council (FSC) certified wood, until the Castle Special Place is off the chopping block and SLS along with Alberta Sustainable Resource Development have reformed forest management in the Crowsnest Forest through an FSC certification process. The Alberta Foothills Network and volunteers are currently following up in-person with the retailers. Representatives met with the company again last week.

Citizens are also asked to check their local retailer and if selling SLS wood from the Crowsnest Forest, to email the Alberta Foothills Network and while at the retailer, to ask them to sell FSC certified wood instead. SLS is the only sawmill logging in the Crowsnest Forest. Its mill is located in Cochrane, west of Calgary. It predominantly uses contractors for road building and logging.

Water’s equivalent of the Intergovernmental Panel on Climate Change, the Rosenberg International Forum on Water Policy in its 2007 Lessons for Canada and Alberta points to the importance of undertaking headwater (upland watershed) protection in the face of significantly reduced water flows in the Saskatchewan River system of Canada’s Prairie Provinces. It reports that the Crowsnest Forest “may be a good candidate for special watershed protection.” It goes on to state that the proposed park for the Castle Special Place “will pay for itself over and over again in the value of the ecological services it provides alone.”

“Engaging the power of consumers, small and big, through a market action to reform forest management and keep the Castle as a protected area is the best way we figured we could help the two-dozen local business who earlier issued a Tourism and Recreation Industry Advisory about Alberta,” explains Sarah Elmeligi of the Canadian Parks and Wilderness Society.

The initial round of public input on a plan for the South Saskatchewan region found the majority of respondents want an end to clear-cut logging throughout the region. They placed tourism and recreation as second only to agriculture for future economic growth in the region and logging last. Surveys revealed that three-quarters of residents local to the Castle Special Place, located at the south end of the Crowsnest Forest, are opposed to clearcut logging in it and support making it a Wildland Park.

The Castle has the province’s largest diversity of native plants and animals. It has 223 species listed as rare or as Species-At-Risk of extinction within Alberta (called extirpation). That includes grizzly bears, which are trans-boundary.  They are listed as threatened in Alberta and endangered in the U.S.A.

“Alberta’s own grizzly bear status report concludes the net effect of clear-cut logging is bad for bears,” says Louisa Wilcox of the Natural Resources Defense Council. “Alberta can and must make a positive contribution to a shared goal of protecting the Crown of the Continent by reversing the logging decision in the Castle. While it is currently a mortality sink for endangered US bears, it could be the opposite; aiding in recovery.”
SLS also logs in the Bow Forest, which is located in the South Saskatchewan region, upstream of Calgary. The current market action is not against the sale of wood from the Bow Forest.

For more information and interviews contact: www.albertafoothillsnetwork.org
Background
Organizations leading the market action under the umbrella of the Alberta Foothills Network include the local Castle-Crown Wilderness Coaltion, the Alberta Wilderness Association and the nation-wide Sierra Club of Canada and Canadian Parks and Wilderness Society. Other organizations such as Rainforest Action Network and the Natural Resources Defense Council are lending their names and communication skills in support.
The current market action focuses on the 3,518 square kilometer Crowsnest Forest, and is not against the sale of wood from the Bow Forest.  There, the company through an independent FSC assessment firm has completed a pre-assessment to determine if they will enter into an FSC certification process for the Bow Forest.
A wallet and a vote – Two of the most effective tools citizens have to bring about change are their wallet as consumers and their vote.  By not purchasing wood products from the Crowsnest Forest, retailers and citizens alike will be encouraging Spray Lake Sawmills (SLS) and Sustainable Resource Development to reverse the Castle logging decision and for the rest of the Crowsnest Forest to enter into a Forest Stewardship Council certification process, thereby changing practices to meet the strict social and environmental standards of FSC.
FSC is an international certification and labeling system for wood products and is the only one jointly recognized by industry, First Nations, and social and environmental organizations.  Wood and fibre from certified forests are tracked all the way from that forest to the consumer.  Forests are certified against a set of strict environmental and social standards; standards that include community involvement and adequate protected areas. (Principles and Criteria are athttp://fsccanada.org/principlesandcriteria.htm?RD=1 )
The Castle Special Place is one of Alberta’s 81 Special Place protected areas designated by the province between 1995 and 2001. (It is #40 on the government map and list of Special Places athttp://www.tpr.alberta.ca/parks/managing/establishing.asp#special ) In 1998, the Alberta Government added the 1,040 sq km Castle Special Place as the new Castle Special Management Area “to Alberta’s protected areas network; describing it as “a major milestone in the preservation of Alberta’s natural heritage for future generations.”  It remains the only one of 81 Special Places without its protected area status secured by law.
Crowsnest (C5) Forest Management Plan
Contrary to his own public advisory committee (CROWPAC) recommendations, the SRD Minister, Mel Knight  recently approved a 20 year logging plan – C5 Forest Management Plan 2006-2026 – which sets timber and logging as the priority of the public’s Crowsnest Forest, instead of the public’s consistent priorities of watershed protection, wildlife habitat and intact natural landscapes for recreation and tourism.  The plan includes an increase in the annual amount of logging and continues clear-cut logging.  It also is an about-face from the Government of Alberta’s 2008 Land-Use Framework which clearly states, “Historically, watershed and recreation were deemed the priority uses of the Eastern Slopes. These priorities should be confirmed, and sooner rather than later.”
Water & Forests
“There are three elements or objectives in watershed management: quantity, quality, and timing. … Consider, for example, a virgin forest… Such forests produce the highest quality of water and, because forests are cooler and moister than open areas, they tend to delay snow melt. Since an important objective in timing is to delay snow melt as long as possible, this is a desirable feature…
An area which has been cleared of forest cover, either by fire or timber harvesting, experiences a substantial increase in water production … Forest openings are hotter and drier and, because of this, the increased volume tends to be available as an increment on peak flows [increases level of spring flood waters], rather than spread out later into the summer as is the case with a virgin forest. The quality of this increased water also tends to be lower. …
If forest clearing is the result of harvesting, anther factor enters … the forest access roads… Here, unless great care, good planning and, frequently, a substantial investment is provided, major degradation of water quality can result.”(Environment Council of Alberta. 1979. Management of Water Resources within the Oldman River Basin. Report and Recommendations)
For more information contact:
Albertan’s Crowsnest Forest (C5)
3,518 square kilometers 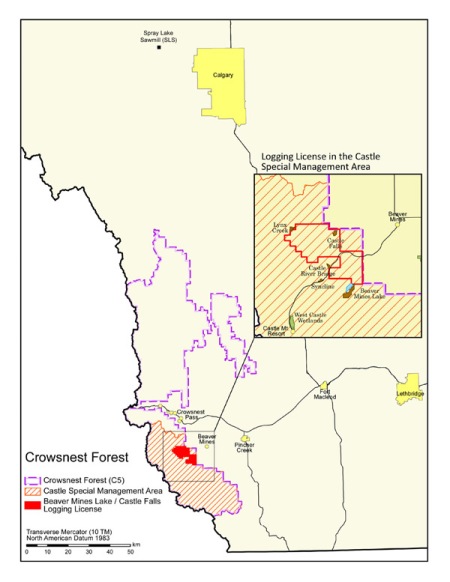 This entry was posted on Tuesday, April 26th, 2011 at 11:15 am and is filed under Uncategorized. You can follow any responses to this entry through the RSS 2.0 feed. You can leave a response, or trackback from your own site.